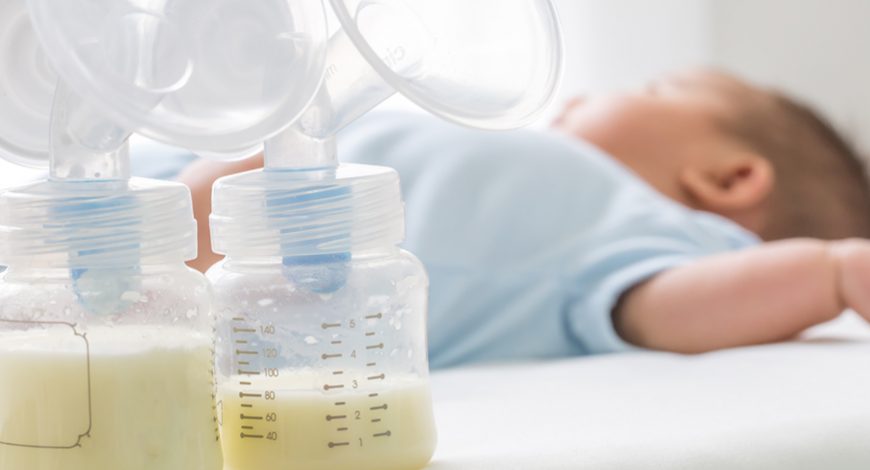 Breastmilk is a unique source of nutrition containing immune stimulating and microbiome developing compounds. The composition of breastmilk changes over the course of lactation and varies within and between feeds. Breastmilk composition also differs between and mothers and between term and preterm infants [1].

Colostrum is the first milk produced after birth and contains a high concentration of immune stimulating compounds known as immunoglobulins. Immunoglobulins commence the development of baby’s immune system preparing for life outside the womb. Colostrum also contains unique microbial strains that begin colonization of beneficial bacteria in the gut [2].
Colostrum contains a high concentration of fatty acids which along with protein begin to decline in the weeks following postpartum [3]. After about 5 days, colostrum will gradually be replaced by transitional milk, and from the second week after delivery to about the 6th week, milk continues to change in composition until it becomes fully mature [4]. The macronutrient composition of breastmilk changes over the course of lactation to suite the growth and developmental needs at each stage of life [1].

The proteins in breastmilk are divided into whey and casein, each comprising an array of proteins and peptides. Proteins in breast milk not only provide nutrition, but also promote gut development and nutrient absorption, as well as supporting immune health and development [5].
Lactoferrin: Lactoferrin is a type of iron-containing protein that slows down the growth of “bad” microbes. Lactoferrin is present in the whey-protein component of breastmilk and is a key nutrient that contributes to the immune benefits seen in breastfed infants [6].
Nucleotides: Nucleotides are an essential group of sugars found in breastmilk that contribute to the building blocks of DNA, making them necessary for dividing cells and growing tissues. They also have important immune roles in infants and assist with intestinal fat absorption [7].

Carbohydrates in breastmilk provide energy for growth and help to establish the gut microbiome.
Lactose: The most abundant carbohydrate in human milk is lactose, which is needed in high amounts to meet the nutritional requirements of the developing brain and central nervous system.
Human milk oligosaccharides: The other significant carbohydrates are human milk oligosaccharides (HMO), which are highest in colostrum but are still present in mature milk. HMOs serve as prebiotics, feeding the good bacteria in the gut as well as supporting infant immune system development [4].
Galactooligosaccharides (GOS): GOS is a longer chain sugar found in breast milk and is also grouped with prebiotics, because it supports the growth of gut microflora [8].

Fats represent the major sources of energy in breast milk and are critical for central nervous system development and for the absorption of fat-soluble vitamins A, D, E and K. Each fat has a unique role in infant health and development.
DHA: Docosahexaenoic acid (DHA) is uniquely important for infant brain and retinal development and unlike other fatty acids, the DHA content in breast milk is affected by maternal dietary intake.
ARA: Arachidonic acid (ARA) is drawn from maternal stores and is critical for developing nerve pathways and immune system development.
Healthy levels of DHA and ARA significantly improve visual acuity and cognitive function in infants and toddlers [9]. A recent study has also shown that colostrum containing a higher component of DHA is associated with higher IQ in children compared to colostrum with a lower DHA content [10].

Breastmilk contains all the essential vitamins and minerals needed for infant growth and development. Studies have shown that breastmilk concentration of vitamins A, D, K, B-group vitamins, folate and minerals manganese, selenium and calcium differ depending on maternal dietary intake and nutrient stores [11-14].

Carotenoids are a group of nutritional antioxidant compounds that have important roles in infant development and are closely associated with maternal dietary intake [12].
Lutein: Lutein is a type of carotene contained in breastmilk. It accumulates in the retina and brain where it prevents oxidative damage [15].
Beta-carotene: Beta-carotene (the inactive form of vitamin A) is found in higher amounts in colostrum, contributing to the rich yellow colour of early milk. Beta-carotene has pro-vitamin A properties, converting to retinol (the active form of vitamin A) when needed [12].

Beneficial microbes: Breast milk contains a diverse microbial community including >200 groups of organisms. These essential microbes begin the infant gut microbiome development which is part of the intestinal immune system and is protective against gut and respiratory infections and inflammation.
Hormones: Breast milk contains hormones that modulate metabolism and body composition such as insulin, leptin, ghrelin and adiponectin [4].

DHA: In western countries such as Australia, USA and the UK breastmilk is typically lower in the omega-3 fatty acid DHA and higher in proinflammatory omega-6 fats. Asian countries such as Japan and China have shown a higher concentration of DHA in breastmilk, which is attributed to their omega-3 intake [4].
Vitamins: Lower concentrations of vitamins A, D, K, B12, and folate have been observed in Vietnam, China, and Pakistan. In some cases, the amounts found in breastmilk were not sufficient to meet the required levels [13].
Minerals: The calcium content of breastmilk is variable depending on maternal intake and stores. Studies have shown the USA, Mexico and China have higher levels of breastmilk calcium. Manganese, phosphorus and selenium have also shown variability across different countries, which may be due to the mineral concentration of the soil [11,14].
Carotenoids: Carotenoids such a lutein and lycopene have shown geographic differences in breastmilk concentration, with higher levels of lutein found in milk from mothers in China compared to those in the USA. In comparison, breastmilk from American mothers showed higher concentrations of lycopene [12].

Select the fields to be shown. Others will be hidden. Drag and drop to rearrange the order.
Click outside to hide the comparison bar
Compare
Compare ×
Let's Compare! Continue shopping